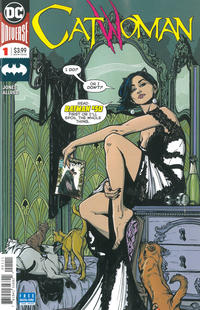 First Line of Dialogue or Text
It's been almost a week since I left Gotham...
Genre
superhero
Characters
Catwoman [Selina Kyle]; Raina Creel; Governor Edmond Creel; Raymond Creel; Adam Creel; Dr. Finick; Will Saito; Sam Yilmaz; Carlos Ayala; Linda Ayala; Simmons
Synopsis
Selina has left Gotham City for California, where she quickly finds herself framed for the murder of two police officers. Detectives Saito and Yilmaz are on the trail, and the governor's wife appears to be behind the frameup, using a gang of catwoman lookalikes.
Reprints
Keywords
California; Villa Hermosa

[You're Not You When You're Hungry. Snickers Satisfies.] (Table of Contents: 13) (Expand) /