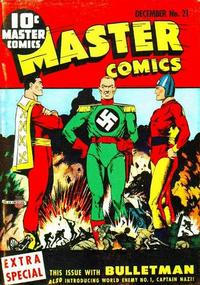 [The Coming of Captain Nazi] (Table of Contents: 2)

The last 1/3 of page 15 is an illustrated advertisement for the latest issue of Bulletman, with figures of Bulletman and Bulletgirl shown.

Are You a Member of the Captain Marvel Club? (Table of Contents: 3) (Expand) /

[The Curse of the Balandrachu] (Table of Contents: 6)

[The Goat People and the Dragon] (Table of Contents: 7)

[The Peacemakers] (Table of Contents: 8)

Carlson can be recognized by his horses with rather long, narrow tapering heads, and especially by his way of drawing the legs of running horses. In panel 8 on page 2, notice the outstretched front leg of the white horse.

[Black Giant, the Man from the Grave] (Table of Contents: 10)