The Dark Gods A Demigod Must Fall! (Table of Contents)

Cover is an homage to the cover of Wonder Woman #1 (DC, 1942 series) as the Wonder Woman's pose here is similar to that cover, although that cover featured Wonder Woman riding a regular horse, here she is riding a flying horse. Cover is signed "Merino after H.G. Peter". 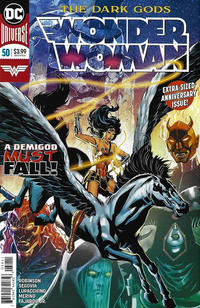