Distributed to newsstands in November 1963. This issue includes 10 pages of paid advertisements and is the second issue of Tales of Suspense without text pages.
On sale date as given in the copyright application as listed in the Catalog of Copyright Entries, Periodicals, July-December 1963, page 420, registration number B72338.

The Mandarin! (Table of Contents) 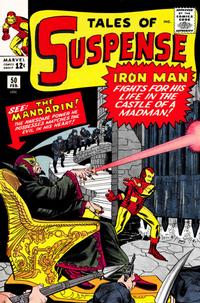 The Hands of the Mandarin! (Table of Contents: 1)

In this story Pepper gets a makeover and is consequently redrawn as a more attractive woman.

Another Marvel Masterpiece (Table of Contents: 2)

Job Number
X-535
First Line of Dialogue or Text
Sometimes the incredible begins with the commonplace!
Genre
horror-suspense
Characters
Adam Bentley; Larry Lieber
Synopsis
A man frantically tries to convince passersby that he is being chased by storybook characters. He is arrested by the police, but disappears from his jail cell, as he himself is a fictional character created by Larry Lieber.
Reprints

Info from Stéphane Petit via the GCD Error Report (September 28, 2009).

Another Marvel Masterpiece (Table of Contents: 4)

Job Number
X-526
First Line of Dialogue or Text
In this log is inscribed the whole pageant of cosmic history!
Genre
science fiction
Characters
Watcher [Uatu] (narrator); Wilbur Weems; Sally
Synopsis
A meek and lonely space pilot volunteers for a suicide mission to investigate a strange cosmic cloud. The cloud hides a utopian planet, whose inhabitants only want humans brave enough to face the unknown to visit them.
Reprints

Lettering credit is from the reprint in Marvel Collectors' Item Classics #5.(Checked by Merlin Haas from that issue, October 1, 2009.)