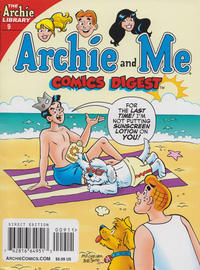 Genre
humor; teen
Characters
Archie Andrews; Betty Cooper; Jughead Jones; Dilton Doiley; Hiram Lodge; Smithers; Veronica Lodge; Hermione Lodge
Synopsis
When it is too hot at the beach, Archie and his friends decide to go to the Lodge Mansion because it has air conditioning and an indoor pool.
Reprints

Credits list Stan Goldberg as penciller and Henry Scarpelli as inker, but this looks like Pat Kennedy, not Stan Goldberg. Pat Kennedy and Rudy Lapick were credited in the index of the original printing, and those credits are used here.

Straining Their Friendship (Table of Contents: 4)

Index of the original printing credits Hal Smith for writing and Rudy Lapick for inking.

A Beached Tale (Table of Contents: 6)

Simon Cowell and Jennifer Lopez are featured prominently on the cover with the logos of X Factor and American Idol.

Banded Together! (Table of Contents: 11)

Genre
humor; teen
Characters
The Archies [Archie Andrews; Betty Cooper; Veronica Lodge; Reggie Mantle; Jughead Jones]; Simon Cowell; Jennifer Lopez; Keith Richards (cameo); Steven Tyler (cameo); Bingo Wilkin; Josie and the Pussycats [Valerie Smith; Josie Jones; Melody Valentine]; Kelly Clarkstown; Clay Smokestack
Synopsis
While The Archies audition for Simon Cowell's X Factor season finale, Josie and the Pussycats audition for American Idol's season finale. The media is more interested in the relationship between Archie and Valerie (from the two different bands) and follow them through the reality show "The Bingoes" which follows Bingo Wilkins' band. In the end, the finale of "The Bingoes" wins the ratings because of the relationship and Bingo quips that they didn't even appear in the final show.
Reprints

First Line of Dialogue or Text
Gosh! I'd give anything to be able to take Selma to the dance, Saturday!
Genre
humor; teen
Characters
Dilton Doily; Archie Andrews; Selma
Synopsis
Archie gives Dilton some advice about 'accidentally' running into Selma and casually asking her for a date.
Reprints

Safety Slides with Tips on Boating (Table of Contents: 20)

First Line of Dialogue or Text
Your sound is great but could you play a little softer?
Genre
humor; teen
Characters
Archie Andrews; Mary Andrews; Fred Andrews; Betty Cooper; Veronica Lodge; Jughead Jones; Reggie Mantle; Li'l Jinx; Gigi
Synopsis
The vibrations from the music when the Archie's practice is too much for Mr. Andrews.
Reprints

Iguana Be Loved By You! (Table of Contents: 23)

The Love of My Lifeguard! (Table of Contents: 24)

Be Careful What You Wish For (Table of Contents: 27)

The Real Thing (Table of Contents: 29)

Genre
humor; teen
Characters
Archie Andrews; Jughead Jones; Reggie Mantle; Betty Cooper; Veronica Lodge; Ethel Muggs
Synopsis
The boys visit a new year-round indoor beach in town which has all the things you would expect in a beach, except the girls.
Reprints

formerly a World of Archie story.

Genius at Work (Table of Contents: 31)