Tango: All at Half-Light is a single Corto Maltese story set in the year 1923 near Buenos Aires, Argentina. Created by Hugo Pratt in the middle of the 1980s. Guido Fuga contributed with artwork of trams, cars and backgrounds. Translated from Pratt's original Italian scripts.

First published in the Italian magazine Corto Maltese from June 1985 to May 1986 with the Spanish title "Y todo a media luz", which refers to a tango song from 1925 called "A media luz". Later Italian albums had the title "Tango… y todo a media luz", or only "Tango".

The indicia gives that the first printing occurred in August 2018, but the actual date was in July 2018. 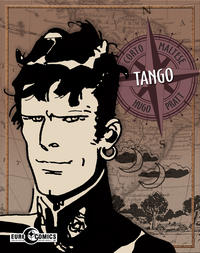 First Line of Dialogue or Text
In 1923 Buenos Aires, Corto Maltese investigates the disappearance of his friend Louise Brookszowyc.

Inside facing half of front gatefold cover. Contains a brief description of the story of the volume, and an uncredited old photograph of the Hippodrome racetrack in Buenos Aires.

[map of Argentina] (Table of Contents: 2)

Reverse side of front gatefold cover (repeated on reverse of rear gatefold cover). Historical map of part of Argentina including the area surrounding Buenos Aires, the setting for the story.

Tango: All at Half-Light (Table of Contents: 3)

Tango: All at Half-Light (Table of Contents: 4)

A double spread of black pages.

List of all the volumes in the series. Preceding page and reverse side are blank.

[map of Argentina] (Table of Contents: 7)

Reverse side of rear gatefold cover (repeated from reverse of front gatefold cover). Historical map of part of Argentina including the area surrounding Buenos Aires, the setting for the story.

First Line of Dialogue or Text
Hugo Pratt (1927-1995) is considered one of the great graphic novelists in the history of the medium.

Inside facing half of rear gatefold cover. Biography of Hugo Pratt and an uncredited photograph of Hugo Pratt in Patagonia, Argentina, in 1952.