The Enforcers! (Table of Contents)

The original, rejected cover by Steve Ditko has been published in Marvel Tales # 147, The Official Marvel Index to the Amazing Spider-Man # 2 and various Foreign reprints. Info per Nick Caputo. 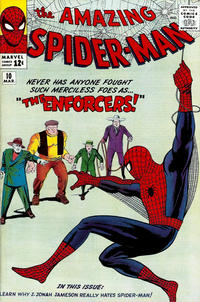 The Enforcers! (Table of Contents: 1)