The Return of the Wizard, Master of Evil!/The Possessed! (Table of Contents) 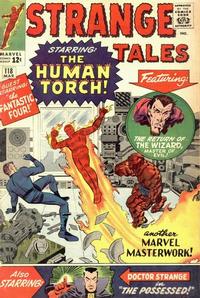 The Man Who Became the Torch! (Table of Contents: 1)

Job Number
X-593
Genre
superhero
Characters
Human Torch [Johnny Storm]; Wizard [Bentley Wittman]; Invisible Girl [Sue Storm]; Mister Fantastic [Reed Richards]; Thing [Ben Grimm]
Synopsis
The Wizard breaks jail, and begins pulling crimes using a new anti-gravity flying device he's invented. Via trickery and disguise, he captures Johnny, then Sue, and begins impersonating Johnny, while planning bigger and bolder crimes with which to use his anti-gravity device. With the help of Reed and Ben, Sue and Johnny escape, and Johnny goes after The Wizard, who attempts to escape by flying higher and higher with his anti-grav disc. But it malfunctions, and, unable to control it, he just keeps going higher and higher...
Reprints

This is the fourth appearance of The Wizard; he last appears in issue #110 (July 1963) and he next appears in Fantastic Four (Marvel, 1961 series) #36 (March 1965), when he was rescued by Paste-Pot Pete and The Sandman. The time-frame is a bit off, as Pete and the Sandman broke jail sometime after Pete's appearance in issue #124 (September 1964), and most or all of the remaining Torch solo stories up to Strange Tales #134 (July 1965) take place before the formation of the Frightful Four! (How long was he up there in the atmosphere?). Colors credit for Stan Goldberg removed due to lack of attribution. (26/03/2010)

The Weatherman (Table of Contents: 3)

Job Number
K-71
Genre
fantasy-supernatural; science fiction
Characters
Willie Wimms; Hugh Wimms
Synopsis
In the future, young boy's afternoon is nearly ruined by a scheduled rainstorm, but when he runs into the rainmaker's magical assistant, he gets a delay.
Reprints

The Possessed! (Table of Contents: 4)

Genre
superhero; fantasy-supernatural
Characters
Doctor Strange [Stephen Strange]; Herr Braun; Fraulein Lieber
Synopsis
Using his "Earthly Scanner," in which is a small replica of the planet, Strange senses evil somewhere in Bavaria. In a remote village, he finds the townspeople the victims of some strange form of possession, and believes a supernatural force is at work. But he soon discovers it's really the work of aliens from another dimension. He sends them packing, and seals off the dimensional doorway forever.
Reprints

This is the first appearance of The Orb Of Agamotto. The dimensional doorway which changes appearance to that of a large rock resembles the alien house in "The Outer Limits" episode, "The Guests."