This issue includes 10 pages of paid advertisements.
On sale date as given in the copyright application as listed in the Catalog of Copyright Entries, Periodicals, July-December 1963, page 420, registration number B79627.

The Scarecrow! (Table of Contents) 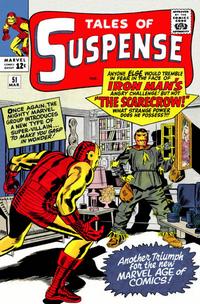 The Sinister Scarecrow! (Table of Contents: 1)

The Recipe (Table of Contents: 2)

The Green Thing! (Table of Contents: 3)

Job Number
X-564
First Line of Dialogue or Text
If you look at this man, you'll see nothing unusual about him!
Genre
science fiction
Characters
Fernusans (extraterrestrials); unnamed farmer
Synopsis
A psychic alien plant lands on Earth and torments a human to prove its power, but it is eaten by a crow.
Reprints

The Primitive! (Table of Contents: 4)

First Line of Dialogue or Text
On another world, light years from our Earth, there stands a strange structure...
Genre
science fiction
Characters
Watcher [Uatu] (narrator); Vince Harding; Paul Harding
Synopsis
A space explorer finally gives up his quest to find a more advanced species, not knowing that the primitives he found were more advanced, until they invented the cobalt bomb.
Reprints