The Brotherhood of Evil Mutants (Table of Contents)

Sources for letters credit are The Marvel Comics Index and The Official Marvel Index to the X-Men. 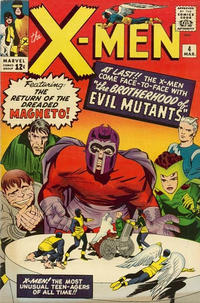 The Brotherhood of Evil Mutants! (Table of Contents: 1)

Job Number
X-607
First Line of Dialogue or Text
You are gazing at a sight which few Homo sapiens have ever been privileged to witness...
Genre
superhero
Characters
The X-Men [Professor X [Professor Charles Xavier]; The Angel [Warren Worthington]; The Beast [Hank McCoy]; Cyclops [Scott Summers]; Marvel Girl [Jean Grey]; Iceman [Bobby Drake]]; The Brotherhood of Evil Mutants [Mastermind; Magneto; Toad; Quicksilver [Pietro Maximoff]; Scarlet Witch [Wanda Maximoff]]
Synopsis
Magneto and his new Brotherhood of Evil Mutants steal a freighter and use it to take over the South American nation of Santo Marco. The X-Men invade and take the country back. Xavier is caught in an explosion and loses his mental powers.
Reprints
Keywords
Santo Marco