FF and Spider-Man do not appear in the issue. 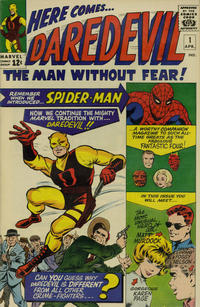 The Origin of Daredevil (Table of Contents: 1)

Kirby pencils on splash. Image taken from cover. Cover of Amazing Spider-Man #1 is reprinted on the splash page - pencils by Kirby and inks by Ditko.