The Incredible Hulk versus the Thing! (Table of Contents) 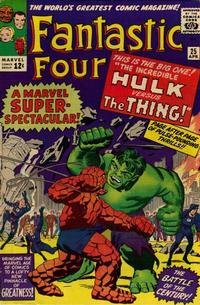 The Hulk Vs. The Thing (Table of Contents: 2)

Job Number
X-614
First Line of Dialogue or Text
Step aside, Reed!
Genre
superhero
Characters
Fantastic Four [Mister Fantastic [Reed Richards]; The Human Torch [Johnny Storm]; The Invisible Girl [Sue Storm]; The Thing [Ben Grimm]]; Alicia Masters; Hulk [Bruce Banner]; The Avengers [Captain America [Steve Rogers]; Thor [Don Blake]; Giant-Man [Henry Pym]; The Wasp [Janet Van Dyne]; Iron Man [Tony Stark]]; Rick Jones
Synopsis
Hulk understands that Rick Jones has deserted him for the Avengers. He comes back to New York to get his revenge on the Avengers but the Fantastic Four are there to stop him. And the Thing is the only one with a chance to defeat him.
Reprints

Another Triumph for Marvel! (Table of Contents: 9) (Expand) /