The Enchantress and the Executioner! (Table of Contents) 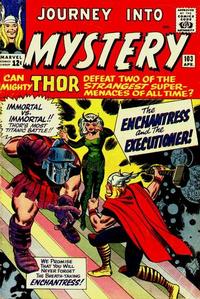 The Enchantress and the Executioner! (Table of Contents: 2)

First Line of Dialogue or Text
Swinging his enchanted hammer at twice the speed of light, the mighty Thor leaves the future, where we left him last issue, and travels back through time!!
Genre
superhero; fantasy-supernatural
Characters
Thor [Donald Blake]; Enchantress (introduction); Executioner (introduction); Jane Foster; Loki; Odin; Tomorrow Man [Arthur Zarrko] (cameo flashback)
Synopsis
Loki and Odin conspire to end Thor's infatuation with Jane Foster by sending the Enchantress to seduce him away from his mortal love. The heavy handed Executioner fouls things up and the mission is unsuccessful.
Reprints

At this point, the stories take a turn to Asgardian themes and backdrops.

Job Number
H-367
First Line of Dialogue or Text
The wrong sort of thing always happened to poor Oscar Meeker.
Genre
fantasy-supernatural
Characters
Oscar Meeker; Mathilda Meeker
Synopsis
A long-suffering pushover is stuck with a battered suitcase, but finds that the case magically fills with money and spends it for him.
Reprints

Between pages 5 and 6 of previous story sequence. Continues in next issue.

To Live Forever! (Table of Contents: 8)

Job Number
X-596
First Line of Dialogue or Text
The theme of this fantasy tale is not new!
Genre
science fiction
Characters
Luther Gorr
Synopsis
In a future where capital punishment has been abolished, the maximum sentence is 90 years imprisonment. A brilliant scientist decides to find a way to make himself immortal, so he may commit crimes with impunity, but turns himself into a rock.
Reprints

This story is a retelling of "I Can Live Forever!", drawn by John Forte, from Journey Into Mystery #55 (November 1959). Most earlier versions of the story made the principal character turn into a redwood tree instead of a rock, and he is not always a criminal. Job number from Tom Lammers and Ger Apeldoorn via the Atlas/Timely discussion group.

Statement of Ownership, Management and Circulation (Table of Contents: 12)

Job Number
X-625
First Line of Dialogue or Text
This is the tale of Thor's odyssey to Mirmir...
Feature Logo