The Rabble Rouser!/Beyond the Purple Veil! (Table of Contents) 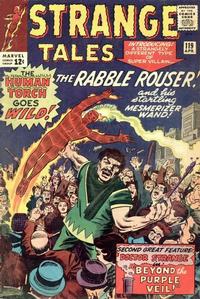 The Rabble Rouser next appears, still rehabilitated, in Wolverine (Marvel, 2003 series) #26 (May 2005). It has been suggested in The Jack Kirby Collector that this story began as a sequel. The identical piece of equipment, a "Thru-The-Ground Tank," was used by The Hate Monger in Fantastic Four (Marvel, 1961 series) #21 (December 1963), by The Rabble Rouser in this story, and by The Fixer in Strange Tales (Marvel, 1951 series) #142 (March 1966), suggesting HYDRA supplied all 3 of them with equipment!

Beyond the Purple Veil! (Table of Contents: 4)