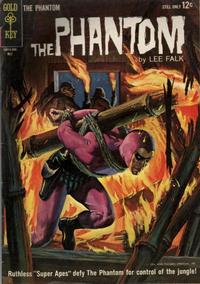 The Super Apes (Table of Contents: 2)

Job Number
7-642
Genre
jungle; superhero
Characters
The Phantom; King of the Llongo; Patrolman Smythe; Super Apes
Synopsis
Three crooks disguise themselves as Super Apes and kidnap the Llongo king in order to loot the jungle dwellers. When they capture Patrolman Smythe, the Phantom rescues him, then falls captive himself. The crooks tie the Phantom to the pole of a burning hut but he escapes, confirming local legends that the Ghost Who Walks cannot die. After capturing the crooks he turns them over to Smythe, telling him to take credit.
Reprints
Keywords
Ape; death trap; disguise; fire; gorilla; Jungle Patrol; king

First Line of Dialogue or Text
I've been following The Phantom's daily and Sunday adventures for some time now and your artist does the best job I've seen.

Genre
jungle
Characters
Victor King; Francis Queen; Jack Hawkins
Synopsis
On a hunting trip of their own, Queen and Jack are injured, then trapped by a pride of lions. King arrives to save them just as they run out of ammunition.
Reprints
Keywords
Hunter; hunting; lion

Genre
jungle; superhero
Characters
Kit Walker [the "current," 21st Phantom as a boy]; Red; watchman; schoolmates
Synopsis
Kit excels at school and sports while maintaining a dignified reserve, which provokes constant bullying. He shrugs it off but rescues the injured leader of the bullies, earning their friendship.
Reprints

The Phanton Pin-Up (Table of Contents: 7)