A new logo begins this issue, minimizing "Tales of Suspense" and emphasizing "The Power of Iron-Man". 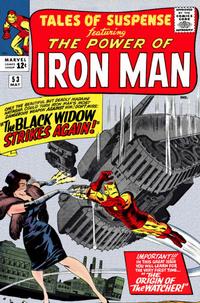 The Magician (Table of Contents: 2)

Job Number
[G-719]
Genre
fantasy-supernatural
Characters
Howard; Uncle Bart
Synopsis
A TV studio page and aspiring magician gets a lucky break when he meets a real sorcerer time traveling from the past.
Reprints

The Omen (Table of Contents: 3)

Job Number
[X-580]
First Line of Dialogue or Text
Are you superstitious?
Genre
science fiction
Characters
Lokar
Synopsis
A superstitious warlord thinks a flare of light is a good omen for an invasion, but when it is discovered to be a meteor his entire world must evacuate in order to survive.
Reprints
Keywords
Venturus (planet)

The splash page title of this feature utilizes the same design as the more modern appearance of the X-men logo, first appearing in X-men #50 (1963) and matching the color scheme in #51
(1963).

First Line of Dialogue or Text
In a tension-filled operating room, grim-faced doctors labor valiantly to...
Genre
science fiction; superhero
Characters
Watcher [Uatu] (origin); Ikor (introduction, Uatu's father); Emnu (introduction); Prosilicans
Synopsis
The Watcher comes from a super-advanced race that decides to share its technology with others. When their first attempt ends in tragedy they vow never to interfere with the affairs of less advanced species.
Reprints
Keywords
Prosilicus (planet)