On the Trail of the Human Top! (Table of Contents) 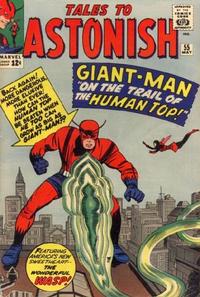 On the Trail of the Human Top! (Table of Contents: 1)

First Line of Dialogue or Text
At their New York lab, Giant-Man and the Wasp show their local fan club a...
Feature Logo

Giant-Man and the Wonderful Wasp
Genre
superhero
Characters
Giant-Man [Henry Pym]; Wasp [Janet van Dyne]; Human Top [Dave Cannon]
Synopsis
The Human Top breaks out of prison. Giant-Man and the Wasp have to get him back. The Top uses Giant-Man's capsules to become giant and captures the Wasp, but Giant-Man distracts him while the Wasp frees herself and termites make the Top fall through a roof, allowing his recapture.
Reprints

The Treasure! (Table of Contents: 2)

Text story with illustration. Continues from last issue. Printed between the pages of the Giant-Man story.

The Gypsy's Secret! (Table of Contents: 4)

Job Number
X-601
First Line of Dialogue or Text
We open with a typically peaceful, harmonious scene in Giant-Man's laboratory...
Genre
science fiction
Characters
Wasp [Janet van Dyne] (narrator); Gorko; Baron Radzic; Giant-Man [Henry Pym] (framing sequence)
Synopsis
A cruel baron tries to force a gypsy to give him the secret of turning lead into gold, but the gypsy is really an alien looking for a human specimen for a zoo on his homeworld.
Reprints

Kuramoto credit per Nick Caputo, April 2013. Previous indexer credited Ray Holloway. Nick notes that based upon an examination of the lettering styles Ray Holloway has been incorrectly identified as using the pseudonym "Sherigail". The name was derived from Morrie Kuramoto's wife and daughter, Gail and Sherry, as noted here: