The Angel Is Trapped! (Table of Contents)

Unaltered stats of this cover have been published in various reprints, including Marvel Masterworks: The X-Men Volume Three, 1987; the original version had no highlights on the Angel and different Cyclops, Marvel Girl and Iceman figures. Possible Severin alterations on The Angel per Nick Caputo. 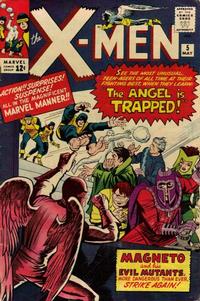 Job Number
X-668
First Line of Dialogue or Text
Last issue, while battling Magneto and his evil mutants, Professor Xavier was injured and seemed to have lost his great mental powers!
Genre
superhero
Characters
X-Men [Professor X [Professor Charles Xavier; Angel [Warren Worthington]; Beast [Hank McCoy]; Cyclops [Scott Summers]; Iceman [Bobby Drake]; Marvel Girl [Jean Grey]]; GUESTS: John Grey; Elaine Grey; VILLAINS: The Brotherhood of Evil Mutants [Magneto; Toad; Quicksilver [Pietro Maximoff]; Scarlet Witch [Wanda Maximoff]; Mastermind]
Synopsis
With Xavier's mental powers gone, the X-Men try to decide how they will function without his leadership. Trying to ferret out the X-Men, Magneto has the Toad enter an athletic event where he leaps to victory. With the crowd turning hostile due to the Toads amazing abilities, the X-Men arrive on the scene to capture him. Magneto snags Angel and whisks him away to Asteroid M. In an attempt to trade the Toad for Angel, the X-Men arrive on Asteroid M where they battle the Brotherhood once again. On their safe return to Earth, Xavier reveals that his power loss was a ruse to test his students.
Reprints
Keywords
Asteroid M