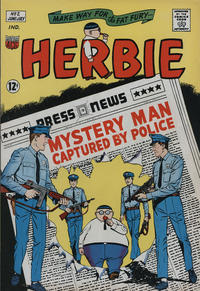 Herbie and the Purloined Pops! (Table of Contents: 1)

Genre
humor; satire-parody; superhero
Characters
Herbie Popnecker; Senator McClellan; Senator Javits; The Man in the Cloak
Synopsis
The Man in the Cloak is stealing all the lollipops so Herbie investigates. Closing in on the gangster, Herbie is mistaken for the villain and is questioned by a Senate committee that sends him to jail. To set things straight, Herbie breaks out of jail, tracks down, and stares down the real criminal into confessing.
Reprints

On page 8, the writers for Horrible Science Fiction discuss a plot much like a typical Herbie scene. Perhaps Richard Hughes is depicted as the writer pitching the story.

Genre
humor; satire-parody; superhero
Characters
Herbie Popnecker; Pincus Popnecker; General Merton Boop
Synopsis
Dad gets Herbie onto a mission to Planet Fink. Problem is, there are only officers and Herbie is the crew. Herbie bails out the mission over and over, but never receives credit. Herbie's father is resigned to the fact that his son is a Little Fat Nothing, and that's all he'll ever be.

Second of three text stories in Herbie comics. "Through space he trudged" is how Herbie's flying is described. (p.1, column 2, halfway down). After Herbie fights a five-mile-long serpent, it is "neatly tied up in the best Boy Scout knots that Herbie Popnecker could remember." This ties into Herbie's cameo appearance as a Boy Scout in Unknown Worlds #20 (December 1961).

Genre
humor; satire-parody; superhero
Characters
Herbie Popnecker; Cinderella; Marie Antoinette; George Washington; Louella; Alexander
Synopsis
Herbie decides to get a girlfriend. A beauty uses Herbie to make her boyfriend jealous. Herbie wants to impress her and goes back in time to get her a pet dinosaur, Cinderella's glass slippers, and Marie Antoinette's jewels, only to find out that he is unwanted. Fortunately, there's always lollipops.
Reprints

When looking over the field, Herbie dislikes any traits like his (fat, glasses). To get Cinderella's shoes, Herbie uses a magic lollipop to enlarge a Mother Goose book that he walks into. The story contains a parody of the mirror scene from I Love Lucy with Lucy and Harpo Marx, only with Herbie and Marie Antoinette.