MYSTIC COMICS is published bi-monthly by Timely Comics, Inc. at Meriden, Conn. Application for second class entry is pending at the post office at Meriden, Conn., under Act of March 3, 1879. Contents copyright 1941 by Timely Comics, Inc., 330 W. 42nd St., New York, N. Y. Single copies 10¢; yearly subscription 60¢ in the U. S. A. No similarity between any of the names, characters, persons and/or institutions appearing in this magazine with those of any living or dead person or institution is intended, and that any such similarity which may exist is purely coincidental. Printed in the U. S. A.
December, 1941 issue.

First Line of Dialogue or Text
As the deadly monsters from Hitler's trunk of terror were freed, the Destroyer plunged down!
Genre
superhero
Characters
Destroyer [Keen Marlow]; Adolf Hitler
Reprints 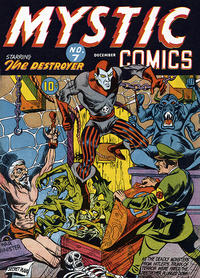 The Machine of Death (Table of Contents: 2)

Genre
superhero
Characters
Destroyer [Keen Marlowe]; Florence von Banger; Adolf Hitler
Synopsis
After finding food for a starving German couple, Keen and Florence stumble across a scientist trying out his new death machine. Keen sabotages it, but that gets Florence and him sent to a concentration camp. He escapes, becomes the Destroyer, and shuts down the machine and its creator once and for all.

The Destroyer's last name is Marlowe in this issue, but was Marlow when he was introduced in #6.

The League of Blood (Table of Contents: 3)

Script credits suggested by the Who's Who.

Genre
superhero
Characters
Black Widow [Claire Voyant]; Satan
Synopsis
Satan sends the Black Widow to claim the souls of Lewis and Sykes, America weapons manufacturers who are selling their weapons to the Axis as well as the Allies.

Heritage of Destruction (Table of Contents: 5)

Genre
superhero
Characters
Destroyer [Keen Marlowe]
Synopsis
While the Destroyer hides out with a man he has rescued from Nazis, he tells the man of when he had to knowingly walk into a trap to prevent innocent German civilians from being executed.

Genre
superhero
Characters
Challenger [Bill Waring]
Synopsis
The Challenger faces a large ape-like man who has changed his career from boxing to crime in hand-to-hand combat.

Ger Apeldoorn notes at atlastales.com that Sekowsky usually penciled but the art does not look like his. Klein's signature comes first.

Genre
superhero
Characters
The Terror
Synopsis
The Terror hunts down a gang of looters who have decided to hit only small businesses that are less likely to have the sort of security and defenses that banks have.

[The Dweller in the Haunted Cave] (Table of Contents: 9)

Genre
adventure; fantasy-supernatural
Characters
Davey Drew (introduction; origin); Demon (introduction)
Synopsis
Young orphan Davey Drew inadvertently frees the Demon, embodiment of mankind's evil, from his prison in a cave. The Demon swears to destroy humanity, but in return for freeing him he swears not to harm Davey and gives him a cloak that will protect him. Horrified, Davey brings the military to stop the Demon, but succeeds only in driving him off temporarily.

Genre
superhero
Characters
Black Marvel [Dan Lyons]
Synopsis
Dr. Weems drinks a concoction that he thinks might be a cure for pneumonia, but it instead transforms him into a Mr. Hyde-like monster who becomes known as The Grinner by the local criminals. The Black Marvel must stop him as he tries by intimidation and murder to gain control of prize oil-producing land.

Genre
superhero
Characters
Blazing Skull [Mark Todd]
Synopsis
Mark Todd (in this story said to be a district attorney) hears of mysterious thefts at an art museum that happen without anyone breaking in to the building. He decides to tackle the case as the Blazing Skull, and realizes that the thief has been hiding out in the museum disguised as a statue during the day.