Prisoner of the Plantman!; Witchcraft in the Wax Museum (Table of Contents)

Corrected art credits from Nick Caputo via the GCD Errors list, December 2008. Original indexer credited Ditko with inks for the upper part and pencils for the lower. 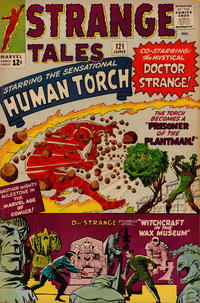 Prisoner of the Plantman! (Table of Contents: 1)

Witchcraft in the Wax Museum! (Table of Contents: 2)

Job Number
X-665
Genre
superhero; fantasy-supernatural
Characters
Dr. Strange [Stephen Strange]; Baron Mordo [Karl Amadeus Mordo]
Synopsis
A phone call lures Strange away in his ectoplasmic form, so Baron Mordo can steal his body. Knowing that if the two are not reunited in 24 hours Strange is doomed, Mordo places a spell over the body so Strange cannot return to it. Using his amulet to retrace Mordo's steps, he finds Mordo, and his own body, in a wax museum. Tricking Mordo into fighting him in his ectoplasmic form, Strange turns the tables by trapping Mordo outside his body, and with Mordo held thus, is able to return to his own. Mordo warns Strange his unwillingness to finish him will be his undoing.
Reprints

Statement of Ownership, Management and Circulation (Table of Contents: 4)

The Salesman (Table of Contents: 5)