Includes 10 pages of paid advertisements. On sale date as given in the copyright application as listed in the Catalog of Copyright Entries, Periodicals, 1964, page 349, registration number B96819.
This issue has variants:

The Mandarin's Revenge! (Table of Contents) 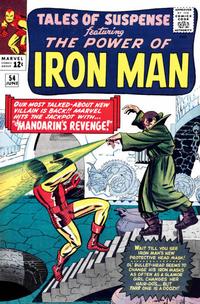 The Mandarin's Revenge! (Table of Contents: 1)

Job Number
X-672
First Line of Dialogue or Text
Being a superhero like Iron Man isn't all fun and glamor!
Genre
superhero
Characters
Iron Man [Tony Stark]; Mandarin; Pepper Potts; Happy Hogan
Synopsis
Tony's observer missiles have failed in Vietnam. So, he goes to investigate, wich leads him to the Mandarin. He attacks the Mandarin's castle, but he is captured.
Reprints

The Mandarin last appears in issue #50 (February 1964). This story continues next issue.

Job Number
H-487
First Line of Dialogue or Text
"The effect of sound waves upon matter have always been a problem of interest to scientists, Mr. Bolton," Professor Carmichael told...
Genre
spy
Characters
Ezra Bolton; Prof. Carmichael; Prof. Greever
Synopsis
A bookkeeper dreams that he is a government agent hunting a mad scientist with a destructive sound device.
Reprints

Job Number
X-656
First Line of Dialogue or Text
If you're a faithful reader of our mags, you know that fantasy tales can begin at the most unlikely places... even on...
Genre
science fiction
Characters
Skrang; Miss Hotchkiss; Fox-People
Synopsis
An invincible alien invader has weapons that can disable all Earth's armed forces, but he is frightened off when he see's an old lady's fox-fur collar, since his people have never been able to beat a fox-like alien race, and he thinks that the humans have beat and skinned them.
Reprints
Keywords
spectro-scanner

The Avengers / promo (ad from the publisher) / 0.33 page (report information)

Job Number
X-654
First Line of Dialogue or Text
On a distant spinning sphere stands the strangest figure in the heavens--the majestic Watcher, whom we now...
Genre
science fiction; superhero
Characters
Watcher [Uatu]; Ikor (Uatu's father, flashback); Emnu (flashback)
Synopsis
The Watcher is tempted to break his vow of non-interference, but sees that it is for the best to obey.
Reprints
Keywords
radioactive waste