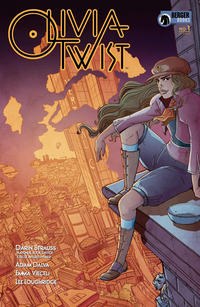 Honor Among Thieves Chapter One: The Gates of Loss (Table of Contents: 1)

Genre
adventure
Characters
Olivia Twist; Pip; Artful Dodger; Mr. Bumble; The Esthers [Nicola Nickleby; Therese Defarge; Little Nell; Charley Bates] (cameo); Fagin (cameo)
Synopsis
When Olivia reaches her eighteenth birthday, she must leave the orphanage where she has grown up. She tries to help Pip, another orphan, but without success. Outside, she meets the Artful Dodger, who helps keep her out of trouble and takes her home to a gang called the Esthers, led by Fagin.
Reprints
Keywords
Americatown; Charles Dickens; orphanages; Provis; Vertical City

Story is an adaptation of the novel Oliver Twist by Charles Dickens, and takes place in a future dystopian society.

A Twist in Time (Table of Contents: 2)

Novelist Struss talks about the genesis of Olivia Twist, which arose out of discussions with Adam Dalva, previously one of Strauss's graduate students.