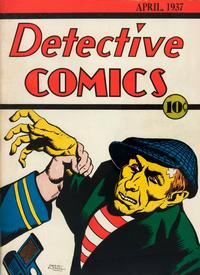 First Line of Dialogue or Text
Say! You're pretty good!
Genre
detective-mystery
Characters
Slam Bradley; Shorty Morgan; Pete Graves (death); Betty Graves; Tony (villain, introduction, death); Nick (villain, introduction); Tony and Nick's boss (villain, introduction)
Synopsis
Following a fight between Slam and Pete Graves, Graves is shot and killed. Slam is arrested but is released. Meanwhile, Shorty hitches a ride on the rear of the suspect lawyer's car, and learns of a plot to terrorize steel workers into joining a crooked union. Graves's sister tries to shoot Slam, but he decides that running is the most sensible option. Shorty is taken to Jinx Tower, where he is thrown off a girder, but is rescued by Slam swinging past on a rope. Slam gets the lawyer to confess everything and gets kissed by Sally Graves as a reward.

Genre
adventure; western-frontier
Characters
Buck Marshall; Mr. Taft (villain, introduction); Black Pete (villain, introduction)
Synopsis
The Sheriff asks Buck to investigate the blowing up of the dam which supplied water to the Circle B range. En route, Buck finds a dead body with $2,000 in cash. He rides into town to talk to the bank president, Taft, but is knocked out. Later, Taft tells him the town is run by the bully Red Jack. Buck once saved Red Jack's life and he now returns the favor by getting him out of town safely. Buck returns to town that evening and discovers that Taft is the actual crook. He and the sheriff place him and his cronies under arrest.

The story is printed in black and white.

[The Disappearing Duck] (Table of Contents: 5)

First Line of Dialogue or Text
Hey, Gus! - Hurry over to the Beekman home...
Genre
humor; detective-mystery
Characters
Gumshoe Gus; Mr. Beekman
Synopsis
Gus is assigned to investigate the disappearance of a pet duck from the Beekman home. Eventually he finds a letter from the duck (!) telling how she has fallen for screen idol Donald Duck and is heading for Hollywood.

[The Peruvian Mine Murders, Part 2] (Table of Contents: 6)

First Line of Dialogue or Text
Acting upon a hunch...
Genre
adventure; spy
Characters
Bart Regan; Philip Marsden (introduction); Sally Norris; Olga Balinoff (villain); the Captain (villain, introduction)
Synopsis
Regan steals a bronze statue from Olga Balinoff, hoping to find a clue to its meaning. He spurns his flame Sally Norris, and in a fit of pique she agrees to marry Philip Marsden. At the wedding she implores Regan with her eyes to stop the ceremony, but he ignores her.

The Narcotic Ring (Table of Contents: 10)

The story is printed in black and white.

Genre
detective-mystery
Characters
Bruce Nelson; Erick von Holtzendorff; Sigrid von Holtzendorf; Sen Yoi; Lt. Casey; Joseph Stucci
Synopsis
Nelson is dragged off from the restaurant by a gang of Chinese and dumped outside of town. By the time he gets back, the entire restaurant has been cleaned out. His fellow diners have disappeared all together.

All characters named for the first time in this chapter.

First Line of Dialogue or Text
Are you sure you were robbed?
Genre
humor