3 Against The Torch! (Table of Contents) 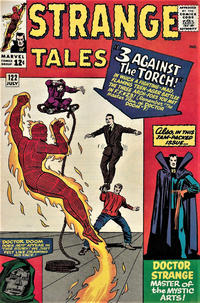 Job Number
X-703
Genre
superhero
Characters
Human Torch [Johnny Storm]; Terrible Trio [Handsome Harry Phillips; Yogi Dakor; Bull Brogin]; Doctor Doom [Victor von Doom] (flashback); Mister Fantastic [Reed Richards] (flashback); Thing [Ben Grimm] (flashback); Invisible Girl [Sue Storm] (cameo)
Synopsis
In flashback we see the how Dr. Doom used "The Terrible Trio" to trap the Fantastic Four, then discarded his underlings by sending them into another dimension! With Doom gone, the three return to Earth, where they're foolish enough to try taking on The Torch again, figuring 3 against 1 would be no contest. WRONG! After, Sue gives Johnny hell for how his "roughneck" friends must have messed up "her" house.
Reprints

The World Beyond (Table of Contents: 2)

Job Number
X-696
Genre
superhero; fantasy-supernatural
Characters
Doctor Strange [Stephen Strange]; Nightmare; The Gulgol (illusion)
Synopsis
Weary from his struggles against supernatural forces, Strange falls asleep, carelessly forgetting to cast a protective spell over himself and becoming a prisoner of the Nightmare World! Nightmare imprisons Strange, the only human who has ever defeated him, then says he's bored and looks forward to other victims. Strange summons The Gulgol, a creature that never sleeps, and Nightmare begs Strange to stop it. He does so without uttering a spell, for in reality, Strange hypnotized Nightmare into seeing the one thing he feared; it was never there in the first place. Freed, Strange wakes up.
Reprints

Printed after the Dr. Strange story. Continues in next issue.