[The Golden River] (Table of Contents) 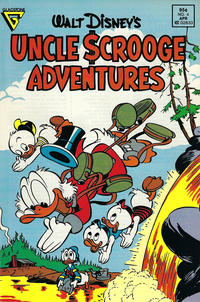 The Golden River (Table of Contents: 2)

Nine panels restored on Pages 17 and 18 from the original version. They were cut by Barks before submission. One panel is cut from original printed version.

The Source of the Golden River (Table of Contents: 4)

Article about the original story that was used as the plot for "The Golden River." Excerpt from a longer article of the same name in the Carl Barks Library Set IV, pp. 9-16. This page includes one panel from original story that was cut when nine panels, that were cut by Barks before the story was submitted, were restored in this issue.