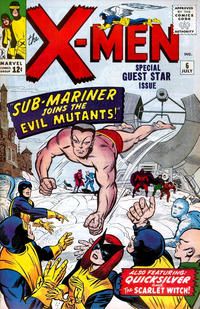 Job Number
X-706
First Line of Dialogue or Text
Even superior mutants with supernatural powers have to eat dinner the same as we...
Genre
superhero
Characters
The X-Men [Professor X [Charles Xavier]; Cyclops [Scott Summers]; Marvel Girl [Jean Grey]; Angel [Warren Worthington]; Iceman [Bobby Drake]; Beast [Hank McCoy]]; The Brotherhood of Evil Mutants [Mastermind; Magneto; Toad; Quicksilver [Pietro Maximoff]; Scarlet Witch [Wanda Maximoff]]; Namor, the Sub-Mariner
Synopsis
Xavier reads a news story about Namor and wonders if he is a possible mutant. Magneto comes to the same conclusion and invades the Sub-Mariner's realm with an invitation to join his Brotherhood. Enchanted by the Scarlet Witch, Namor agrees. The X-Men attack and, during the ensuing battle, Namor decides not to join either team, mutant or no.
Reprints