First Line of Dialogue or Text
H-help! W-what are you going to do to us, Herbie?
Genre
humor; satire-parody; superhero
Characters
Herbie Popnecker
Synopsis
Herbie walking away from two scoundrels hanging on a skyscraper
Reprints

This cover is the first time Herbie says the whole phrase "You want I should bop you with this here lollipop?" 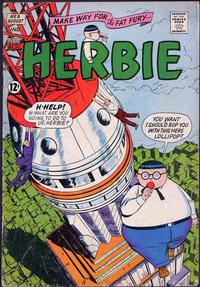 Herbie and the Loch Ness Monster! (Table of Contents: 1)

Genre
humor; satire-parody; superhero
Characters
Herbie Popnecker; Pincus Popnecker; Mrs. Popnecker; Grandpa; Winston Churchill; Loch Ness Monster; Queen Elizabeth II
Synopsis
While visiting his grandfather (who is an older version of Herbie), Herbie hears a radio news report of a rampage by the Loch Ness Monster. Herbie walks across the Atlantic Ocean floor to meet Churchill and offer his help. Herbie visits the Unknown to find the monster's weaknesses, only to find that it's won the championship for tough monsters for 400 years. Still, it's no contest and Queen Elizabeth knights Herbie the Duke of Popnecker.
Reprints

Grandpa appears in Herbie #3, #18, and #22 and is one of many characters who happen to look just like Herbie. Because Herbie has lookalike ancestors on both parent's sides, it is unknown if Grandpa is Herbie's mother's or father's father.

First letters to Herbie in his own comic. Has Herbie at top of page. Bottom of letter page states: Your life won't be worth living without "Herbie"! He'll take care of that!

Genre
humor; satire-parody; superhero
Characters
Herbie Popnecker; Mrs. Popnecker; Pincus Popnecker
Synopsis
Herbie is resting and overhears that his mother let the car roll into a lake; Herbie gets it out and dries it with a searching look. Later, he learns that his father has bought land to build a golf course, unfortunately with a mountain on it; Herbie uses a cinnamon lollipop to take care of the problem.

"Plop, plop, plop" is how he is described walking down stairs. Later: "he plodded heavily up into the air, stifling a yawn. Plop, plop, plop -- that was he trudging through the sky." The story contains details on the properties of different flavors: "Orange. Okay for sudden death. Lemon. Best for mayhem. Lime. For large elephants or small dinosaurs. Chocolate. For riots and public disturbances. Grape. Best for giants and runaway horses. Butterscotch. For rebellious armies.... Cinnamon -- for bopping tough mountains!". Last of three text stories in Herbie comics.