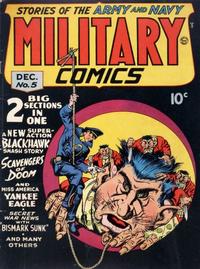 Scavengers of Doom (Table of Contents: 1)

Genre
adventure; war
Characters
Blackhawks [Blackhawk; Hendrickson; Olaf; Chop-Chop; 1 other unidentifiable member (see Note #3 for possible candidates)]; the Scavengers [Garle, and many others] (villains, introduction, some die); Red Laura (villain, introduction); unnamed Nazi General (villain, death); Nazis (villains, some die)
Synopsis
In the ravages of war, it's inevitable that jackals of war, called the Scavengers, would murder, torture helpless victims, and ghoulishly hunt and rob the dead. Ironically, it's the Nazis who succeed in capturing them, but then vow to spare their lives if they can capture the Blackhawks!
Reprints

(1) Story title taken from the cover.
(2) Letterer credit per Cuidera, added by Craig Delich 2012-1-12.
(3) Through the process of elimination, the 1 unidentified member seen on page 6 panel 7 and page 8 panels 1-5 who resembles Andre is likely Zeg.
(4) Hendrick is first called Hendrickson in this issue (no references to the character's name in issue #3 or #4).

[Enter the Sniper] (Table of Contents: 2)

Genre
adventure; war
Characters
The Sniper (guerilla soldier, introduction); Paula; The Gestapo (villains, all die)
Synopsis
Aided by a local girl in Austria, the Sniper ambushes a group of Gestapo officers, all of whom he outwits and kills.

Artist credits revised from Vernon Henkel to ? by Craig Delich 2014-1-1. Jim Amash and Mike Kooiman, in the Quality Companion, state that the art on this story is NOT that of Vernon Henkel nor Bernard Klein. Possibles could be either Frank Harry or Joe Gallagher.

[Cutting out of the Concentration Camp] (Table of Contents: 3)

[The Hungry House] (Table of Contents: 4)

Genre
superhero
Characters
Miss America [Joan Dale]
Synopsis
While on a boat ride, Joan stumbles across a submarine. Then, while investigating a nearby house, she discovers fifth columnists and is ambushed by a brute.

Art credits suggested by the Who's Who.

[The Prisoners Who Didn't Want to Be Rescued] (Table of Contents: 5)

Genre
aviation; war
Characters
Captain William "Wild Bill" Dunn; Private Boomerang Jones; Lola Thomas; the Nazis (villains)
Synopsis
Dunn comes across the sunken hull of the S.S. Athenia, and uses the Blue Tracer to push it back to the surface to terrorize the Nazis into releasing their British prisoners.
Keywords
The Blue Tracer

On Silent Wings (Table of Contents: 10)