Revolt of the Atom's Uniform! (Table of Contents) 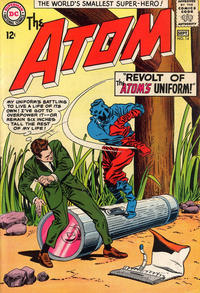 Revolt of the Atom's Uniform! (Table of Contents: 2)

On the page between page 14 and page 15 of the main story sequence.

Letters of comment from readers Jeff Sosnaud, Andy Wickstrom and Bob Butts, with replies from Schwartz.

On the page immediately preceding page 17 of the main story sequence.

Statement of Ownership, Management and Circulation (Table of Contents: 12)

On the page immediately preceding page 17 of the main story sequence.