Crisis on Earth-Three! (Table of Contents) 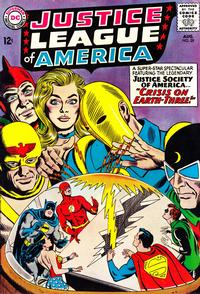 Crisis on Earth-Three! (Table of Contents: 2)

Lettering credit from reprint in JLA Archives. Story continues in next issue. Story across 24 pages in three chapters of 6.67 pages, 11.67 pages, and 4.67 pages.

Brief history of Earth-3 also given in this issue, where history ran a reverse course (e.g.- Columbus, an American discovers England and Europe; The English win their war of independence from America; John Wilkes Booth is U.S. President and assassinated by actor Abraham Lincoln), hence why super-powered persons are evil on this earth. Earth-3 also named this issue and introduction of the Crime Syndicate.

First Line of Dialogue or Text
Although not apparent to the naked eye...
Genre
non-fiction; math & science
Reprints

On the page between page 14 and page 15 of the main story sequence.

What Makes a Tootsie Pop So Special? (Table of Contents: 8) (Expand) /

You Can Have Hours and Hours of Fun with Silly Putty (Table of Contents: 11) (Expand) /

Nationally Famous Prizes at No Cost to You! Or a Big 50¢ Profit for Each Box You Sell (Table of Contents: 16) (Expand) /