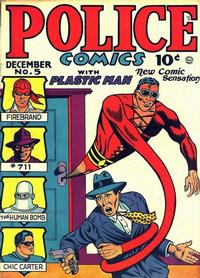 Genre
adventure; crime
Characters
#711 [Daniel Dyce]; The Brick Bat (villain, introduction)
Synopsis
Because he was a model prison, Dyce is awarded freedoms, including being a trustee and working in the prison offices where he had access to the daily news. Because of this freedom, he was enabled to dash out of and into the prison, usually under the cover of darkness. On one such venture, he meets his first masked foe, The Brick Bat, who had forced a scientist to create a lethal brick which released a deadly gas upon impact.

The Brock Bat's cowl was very similar to that of the Batman's.

[The Gambling Syndicate of Tony Fancy] (Table of Contents: 5)

Chic appears as The Sword one final time, wearing a top hat and domino mask instead of his previous yellow and red long johns.

The introductory text states that Chic often becomes the Sword.

[The Return of Madam Brawn] (Table of Contents: 6)

Original indexer reports Plas being forced to smoke marijuana in this story.

[The Madness of Professor Snook] (Table of Contents: 9)

[Ortega the Saboteur] (Table of Contents: 11)

First Line of Dialogue or Text
We find Roy Lincoln and his fiancee, Jean Adams, at a diplomat's ball in Washington.
Genre
superhero
Characters
The Human Bomb [Roy Lincoln]