The Man Who Killed the Phantom! (Table of Contents) 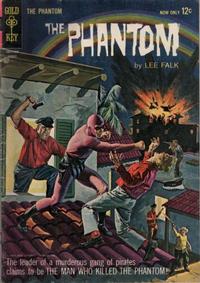 The Belt (Table of Contents: 2)

Job Number
8-645
Genre
jungle; superhero
Characters
The Phantom; the twentieth Phantom; Calder; Rama; Mik
Synopsis
The current Phantom's father was betrayed and murdered by an informant while acting against the Singh pirates. The current Phantom learns that the pirates have turned mostly to smuggling, gambling, and extortion under the leadership of Rama, who claims to have killed the Phantom, and who displays his belt and pistols as proof. In disguise, the Phantom visits their island, turns the pirates against each other, and terrifies Rama, who sets off hidden explosives destroying himself, the pirate base, and most of his confederates.
Reprints
Keywords
Piracy; pirates; rainbow; revenge; smuggler; smuggling

According to a letter from Bill Harris in Robin Snyder's The Comics Vol 23, No 8, August 2012, he wrote all the Phantom stories. The unmasked face of the young Phantom (in a flashback of his father's death) is never shown.

Genre
jungle
Characters
Victor King; Francis Queen; Jack Hawkins
Synopsis
The four friends participate in controlled hunting, but Jack is knocked out and dreams of fabulous riches from the ivory in the elephant graveyard. King and Queen explain that unwell elephants usually expire when unable to arise from rivers, which is why their massive carcasses and their tusks are rarely found.
Keywords
Elephant graveyard; hunter; hunting; ivory

The Phantom Pin-Up (Table of Contents: 6)