The Revolt of the Villains! (Table of Contents) 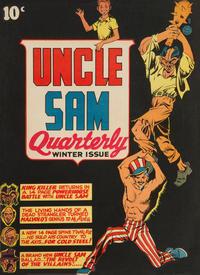 Raiders of the Deep (Table of Contents: 1)

War in Kid-Land (Table of Contents: 2)

The Villains' Revolt, or, Who Swiped My Comic Book? (Table of Contents: 3)

First Line of Dialogue or Text
Tsk. tsk.. tsk!
Genre
superhero
Characters
Uncle Sam; Buddy Smith; Hercules [Joe Hercules]; Neon [Tom Corbet]; Quicksilver [Max]; The Ray [Happy Terrill]; The Black Condor [Richard Grey, Jr. aka Senator Thomas Wright]; The Villain (villain, introduction)
Synopsis
Comic book villains revolt and leap from the page to enslave the comics' creators. Sam rights things when he by convincing the villains to their role "cause the kids must have their heroes, and the heroes must have foes, so the villains should return to work, before the trouble grows!"

Story all in verse. Only Quality hero team-up ever?

The Fiddler of Death (Table of Contents: 4)

First Line of Dialogue or Text
A master fiend strings his violin and takes up his bow to spell the doom of a...
Genre
superhero
Characters
Uncle Sam; Buddy Smith; Malvolo (villain, introduction, death)
Synopsis
Sam faces the Fiddler of death, whose violin sounds was able to control animals.

The splash page of this story features the sheet music for the Fiddler's song.

First Line of Dialogue or Text
One fine day, Margo -- beautiful only daughter of a travelling conjurer, discovers she has tremendous magic power at her fingertips...
Genre
superhero
Characters
Margo the Magician [Margo Webster] (introduction, origin); The Great Presto (introduction, death); Jimmy Webster (introduction); Chick Benson (introduction); Hi; Lo; the Japanese (villains)
Synopsis
The Webster family finds themselves aiding two Chinese soldiers who were fleeing from the occupying Japanese. When gunfire breaks out, Presto calls upon his supernatural abilities and diverts bullets meant for his kids into himself, and he dies. As he dies, he whispers the secret of his powers to Margo, one of which, hypnotism, is used to help free her brother and reporter Chick Benson from Japanese captivity.

Feature probably created by Will Eisner.

Bill Bydem is a by-line and not the name of a real person according to the Who's Who. However, the writer now listed above, added by Craig Delich 2013-6-19, is suggested by the Who's Who. Also, re-arrange "Byden" and you get "Demby", whom Busy Arnold said was on his staff.

The Who's Who credits Bill Bossert as the artist, but the art is NOT comparable to Bossert's other features.

Uncle Sam Tells Buddy Who He Is and How He Came To Be (Table of Contents: 6)

The second text page is shared with the "Statement of the Ownership, Management, Circulation, Etc."

The Return of King Killer (Table of Contents: 8)