The Beetle!; Loki! (Table of Contents) 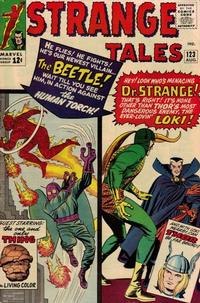 The Birth of the Beetle! (Table of Contents: 1)

Job Number
X-717
Genre
superhero
Characters
Johnny Storm [Human Torch]; Thing [Ben Grimm]; Beetle [Abner Jenkins] (introduction, origin); Alicia Masters; Doris Evans
Synopsis
Mechanic-inventor Abner Jenkins creates the identity of The Beetle. While taking the Fantasti-Car for a double-date, Johnny & Ben wind up being humiliated by The Beetle. But when he tries to rip off the NY World's Fair, the rematch goes the other way.
Reprints

Carl Burgos was the creator of the original Human Torch! The Beetle next appears in Amazing Spider-Man (Marvel, 1963 series) #21 (February 1965).

The Challenge of Loki! (Table of Contents: 2)

Job Number
X-715
Genre
superhero; fantasy-supernatural
Characters
Doctor Strange [Stephen Strange]; Loki; Thor [Donald Blake]; Odin (cameo)
Synopsis
Strange practices the art of levitation. Meanwhile, in faraway Asgard, home of the Norse Gods, Loki, God of Mischief, plots as always. He contacts Strange and tries to convince him that he is a prisoner of Thor, who is evil and deceiving his father. Strange uses a spell to take Thor's hammer, but on examining it, can sense no trace of evil. Realizing he's been had, Strange battle Loki, who later swears vengeance against the mage.
Reprints

Loki would seek revenge against Strange the very next month in Journey Into Mystery #108 (September 1964).

Text story with illustration. Printed after Dr. Strange story. Continues from last issue but with no indication that it is a continued story.