A reprinted collection of hard to find Deadworld short stories that appeared in other Arrow and Caliber press comics as well a some previously unpublished zombie art from Vince Locke's portfolio.
Keywords
Christmas; Louisiana; Zombie apocalypse 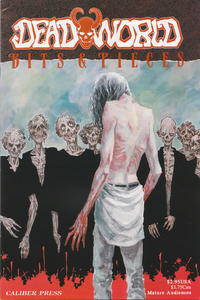 The first ever published story of Deadworld 'Black Sabbath' is incorrectly credited as 'When a Body Meets a Body' in this contents page.

Genre
horror-suspense
Synopsis
Donna, one of a group of survivors, contemplates life before the zombie apocalypse until she is ambushed by hungry, relentless corpses. Unbeknown to her a group of intelligent zombies watch with intent as she is rescued by her armed friends.
Reprints

The first ever published story of Deadworld that originally appeared in Arrows' The Realm #4.

The Doom Patrol (Table of Contents: 3)

Christmas in Louisiana (Table of Contents: 4)

Guns for sale (Table of Contents: 5)

First Line of Dialogue or Text
I'm going to kill him...
Genre
horror-suspense
Synopsis
A man alone in a city full of zombies stumbles on a mysterious pawn shop that seems to be running business as usual.
Reprints
Keywords
pawn shop; zombie apocalypse

This short story is a cross-over between Caliber's Deadworld and Gideon's titles.

A collection of previously unpublished works from Vincent Locke including ad designs, a Deadworld Christmas card and a zombie drawing for the 1990 'Amazing Heroes' swimsuit issue.