The Return of the Blob! (Table of Contents) 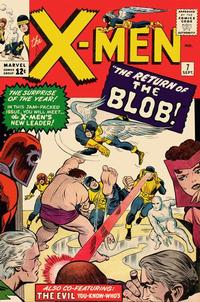 The Return of the Blob (Table of Contents: 1)

Job Number
X-768
First Line of Dialogue or Text
It's come at last!
Genre
superhero
Characters
The X-Men [Professor X [Charles Xavier]; Cyclops [Scott Summers]; Marvel Girl [Jean Grey]; Angel [Warren Worthington]; Beast [Hank McCoy]; Iceman [Bobby Drake]]; Brotherhood of Evil Mutants [Magneto; Quicksilver [Pietro Maximoff]; Scarlet Witch [Wanda Maximoff]; Mastermind; Toad]; Blob; Zelda; Bernard the Poet
Synopsis
The X-Men graduate from Xavier's school. The Professor says he is taking a leave of absence and puts Cyclops in charge. He shows him his new mutant-detecting machine, Cerebro. Magneto finds the Blob and invites him to join the Brotherhood. During a scuffle, Xavier's mental blocks dissolve and Blob remembers the secret of the X-Men. The Blob's name lights up on Cerebro and Scott calls the X-Men back to battle the evil mutants. During the battle, Magneto shoots missiles at the X-Men, even though the Blob is in the line of fire. The Blob, feeling betrayed, decides to return to carnival life.
Reprints