First Line of Dialogue or Text
Get Your Splints Now --- Herbie'll Fracture You!
Genre
humor; satire-parody; superhero
Characters
Herbie Popnecker
Synopsis
Herbie, in turban and not much else, charms a cobra as an officer looks on.
Reprints
Keywords
cobra; snake charmer; turban 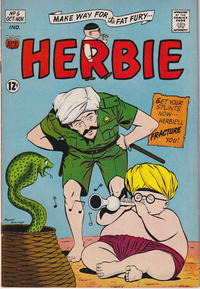 Genre
humor; satire-parody; superhero
Characters
Herbie Popnecker(also as Sultan of Sarsparilla); U Thant (UN Secretary General); Chairman Mao Tse-Tung [Mao Zedong] of China; Lastoza
Synopsis
At school, Herbie is assigned to report on his biggest adventure. He is then called to the United Nations by Secretary-General U Thant to stop a communist threat to India through the Principality of Hanki-Panki. Herbie catches a rocket to China, drops worms (left over from fishing) into Mao's mouth, and uses his many abilities (including his legendary allure to women) to stop communism from getting a foothold, When he returns to his class, Herbie reports that he is too fat to have adventures.
Reprints
Keywords
China; communism; elephant; India; roc; school; thunderstorm; tiger; United Nations

First Line of Dialogue or Text
Oh-hhh! The big dance is tonight and everybody'll be there--
Genre
humor
Characters
Nellie No-Date
Synopsis
Nellie tries to get a date to the big dance with her new neighbor.
Keywords
hammock; neighbor; tuxedo

No credits on story.

There is no box of credits on the splash page, but the frame is signed by Ogden Whitney.
To look like the famous mop-tops, Herbie wears a mop-top, with a prominent metal clip. Eibreh Rekcenpop is Herbie Popnecker, backwards.