The Super-Safecracker Who Defied the Law! (Table of Contents) 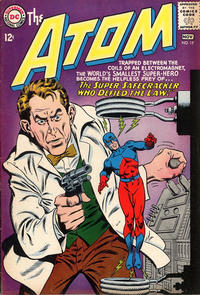 Smoking Is for Squares! (Table of Contents: 1)

On the inside front cover. Published in cooperation with the National Social Welfare Assembly.

Illusions for Sale! (Table of Contents: 2)

The Super-Safecracker Who Defied the Law! (Table of Contents: 13)

Genre
superhero
Characters
The Atom [Ray Palmer]; The Hyper-Thief (villain); Enrichetta Negrini; Jean Loring; Chief Baxter
Synopsis
The Hyper-Thief brags to the Ivy Town police that he can travel through hyperspace and steal anything he wants=, but the Atom proves that he is a fraud.
Reprints
Keywords
hyperspace

First Line of Dialogue or Text
The masses of some asteroids are so small...
Genre
non-fiction
Reprints