Distributed to newstands in July 1964. This issue includes 10 pages of paid advertisements.

The Sensational Sub-Mariner (Table of Contents) 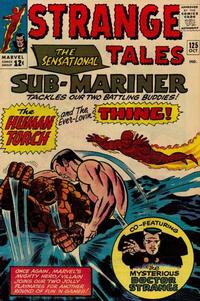 The Sub-Mariner Must Be Stopped! (Table of Contents: 1)

Job Number
X-772
Genre
superhero
Characters
Human Torch [Johnny Storm]; Thing [Ben Grimm]; Sub-Mariner [Namor McKenzie]; Invisible Girl [Sue Storm] (cameo); Mister Fantastic [Reed Richards] (cameo)
Synopsis
Ben and Johnny's hi-jinks are interrupted by the arrival of a pair of LIFE Magazine reporters, who are there to interview Reed and Sue. When the news reports Sub-Mariner is heading for NYC, Ben and Johnny figure they can make an impression by tackling him on their own. Taking out the "U-Car," they find Namor, who seems to be expecting them. A fight breaks out, ending when Namor leaves, feeling he's been "lied to." Reed and Sue arrive and Ben and Johnny are chastising for ruining the peace talk Reed spent weeks to set up. A betrayed Namor vows that their next fight will be to the finish.
Reprints

Mordo Must Not Catch Me! (Table of Contents: 3)

Job Number
X-773
Genre
superhero
Characters
Doctor Strange [Stephen Strange]; Baron Mordo [Karl Amadeus Mordo]; Ancient One [Yao]
Synopsis
Three followers of Mordo attack Strange in his sanctum. After dispatching them, he uses the Eye of Agamotto and his amulet to contact his mentor, but to no avail! Mordo appears saying he's captured The Ancient One. In their ectoplasmic forms, a running battle begins that takes them halfway around the world, until Strange locates his mentor in a half-hidden jungle somewhere in Tibet. The battle continues, until the light of Strange's amulet forces Mordo to give in and free The Ancient One. With Mordo apparently beaten "for a long time," Strange heads back to NYC.
Reprints

Sixth appearance of Baron Mordo; Mordo last appears in issue #121 (June 1964) and next appears in issue #130 (March 1965). Doctor Strange guest-stars in Journey Into Mystery (Marvel, 1952 series) #108 (September 1964), and has a cameo in Amazing Spider-Man Annual (Marvel, 1964 series) #1 (1964) shortly before this story. This episode leads directly into Strange's first encounter with Dormammu in the next issue.

The Message (Table of Contents: 4)

Job Number
[H-729]
Genre
adventure
Characters
Bill Benson
Synopsis
An unhappy foundry worker finds a message from a prisoner and rushes to help, finding that the message was merely a test of courage, and that his actions have gained him his dream job.
Reprints

"Continued next issue..." is written at the bottom of the page, but the second page was not reprinted in subsequent issues. Printed between the pages of the Dr. Strange story. This is the last text story page in Strange Tales. The synopsis describes the whole story, but only those characters that appear on this page are listed here.