This one-shot was sold exclusively at Walmart stores. It is part of a larger partnership with DC Comics which was launched in July 2018. When this initiative began, the titles in this program were stocked in more than 3,000 participating stores across the United States.

These exclusive DC Comics are advertised to "arrive in stores by" a particular Sunday date. However, many stores have the issues on display and available for sale on the preceding Friday. It is these Friday dates that shall be used as the actual on sale dates. 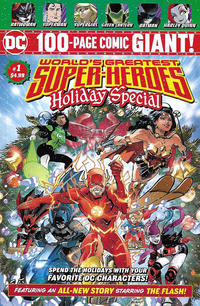 'Twas the Riot Before Christmas (Table of Contents: 1)

All I Want For Christmas... (Table of Contents: 3)

Genre
superhero
Characters
Batman [Bruce Wayne]; Commissioner James Gordon]; Alfred Pennyworth; Ace
Synopsis
Alfred rescues a dog from a shelter then trains it as a gift for Bruce for Christmas. Alfred names the dog Ace, and as a joke, Bruce fashions a mask for him and calls him Bat-Hound.
Reprints
Keywords
Christmas

Light in the Dark (Table of Contents: 5)

The Epiphany (Table of Contents: 7)