First Line of Dialogue or Text
The Phantom falls into a trap from which no man has ever escaped!
Genre
jungle; superhero
Characters
The Phantom; Devil; executioner
Reprints
Keywords
Beheading; death trap; executioner; headsman; wolf 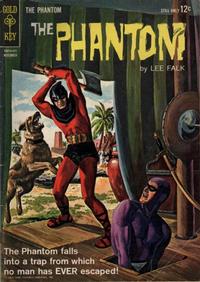 The Sixth Man (Table of Contents: 2)

First Line of Dialogue or Text
It is said that sometimes the Phantom leaves the jungle and walks through the streets of town like an ordinary man!
Genre
crime; jungle; superhero
Characters
The Phantom; devil; ship captain; Cali; Queen Sansamor; contestants
Synopsis
The Phantom allows himself to be shanghaied so as to take part in Queen Sansamor's game. Six men fight to the death to win their way to a tent and fight the Queen's champion, the winner to receive a fortune in jewels. The Phantom wins through to find a death trap and an executioner, rather than a fair fight. He breaks out with Devil's help and proves that the Queen's jewels are paste. Her disgusted soldiers arrest and depose her, ending the rigged tournaments.
Reprints
Keywords
Beheading; death trap; executioner; game; headsman; queen; wolf

According to a letter from Bill Harris in Robin Snyder's The Comics Vol 23, No 8, August 2012, he wrote all the Phantom stories.
The Natives say 'When the angry Phantom speaks the whole Earth trembles! ... and even the strongest of men turns weak with terror!'

A Breathtaking Experience (Table of Contents: 4)