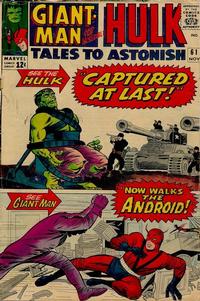 Giant-Man and the Wonderful Wasp
Genre
superhero
Characters
Giant-Man [Henry Pym]; Wasp [Janet van Dyne]; Egghead [Elihas Starr]; Egghead's Android
Synopsis
Egghead uses a simple clothing store dummy to create a giant and powerful android which he plans on controlling mentally as it battles and defeats Giant-Man. He entices his arch-foe into his trap with the promise of a television series based on his heroic exploits (actually, it is Jan who is pretty keen on getting Hank into show biz).
Reprints
Keywords
converti-car

Joe Orlando originally drew this story but refused to make changes demanded by Stan Lee so Steve Ditko came in and did extensive changes to the original art. Info from Mark Evanier via Fred Hembeck.

Captured at Last! (Table of Contents: 3)

Job Number
X-794
First Line of Dialogue or Text
You've finally met your master, Hulk!
Genre
superhero
Characters
Hulk [Bruce Banner]; Thunderbolt Ross; Betty Ross; Major Glenn Talbot (first appearance); Banner Bot
Synopsis
The Hulk takes on the indestructible Banner created robot and, in one of the more dubious plot devices in comics, succeeds in kicking him down a bottomless hole when he realizes that he cannot beat the machine. Glenn Talbot arrives on gamma base sent by the Pentagon to keep an eye on the suspicious activity of Bruce Banner. Glenn decides that keeping an eye on Betty seems like a good idea as well. The Hulk is felled while saving Gamma Base from a missile and Ross captures him in a special restraint built by Bruce Banner based on a design by Tony Stark.
Reprints
Keywords
robot

In the "What's My Name" department, Glen, or was that Glenn Talbot makes his debut in this issue and his name is spelled both ways within back to back story panels; It takes a good ten issues before the name settles down to only using one "N" as his name is spelled both ways interchangeably until then; Over time, the second "N" was added again and has become the standard spelling. Major Talbot refers to Betty Ross as "Miss Brant" in one panel.