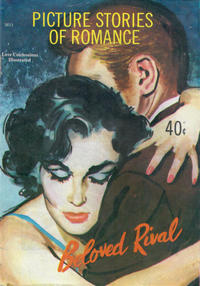 This story was six pages before being reformatted to pocket size.

Job Number
[S-2013]
Genre
romance
Characters
Nancy Barton; Paul Haskell
Synopsis
When her boss tries it on, beautiful Nancy quits. It's not the first time. She decides to apply for the job requiring a plain single woman, hoping for an end to office Romeos.
Reprints

My Only Career (Table of Contents: 4)

Job Number
S1813
Genre
romance
Characters
Judy; Fred
Synopsis
Judy is working hard to save money and Fred is angry he doesn't get time to see her. But the only career Judy wants in marriage.
Reprints

This story was originally three pages before it was reformatted to pocket size.

Beauty Can Be Skin Deep! (Table of Contents: 5)

Genre
romance
Characters
Jean Foxx; Marylin Martin; Jack Dean; Professor Peter Foster
Synopsis
Jean’s roommate Marylin is much more glamorous than she, and steals Jean’s boyfriend Jack. Jean, Marylin, Jack, and Jack’s friend Peter spend a weekend in a mountain cabin. Marylin decides to dump Jack for the wealthy Peter, who Jean finds attractive. Peter says he’ll play along with Marylin so Jack will see how fickle she is, and Jean can win Jack back. The plan works, except Jean doesn’t want Jack, she wants Peter, and gets him in the end.
Reprints

The introduction by Mildred Norton has been removed from this printing. This story was six pages before being reformatted to pocket size.