On-sale date from an ad in 80 Page Giant Magazine #7 and copyright registration. 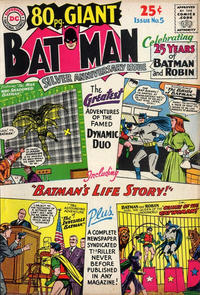 The Crimes of the Catwoman! (Table of Contents: 2)

First Line of Dialogue or Text
Oh, Bebe! I got this ring. May I give it to you?
Genre
humor
Reprints

The Invisible Batman! (Table of Contents: 9)

First Line of Dialogue or Text
Willy, I hear you have a new model motoring set...
Genre
humor

[Rustling on a Reservation] (Table of Contents: 12)

Bride of Batman! (Table of Contents: 14)

Genre
superhero
Characters
Batman [Bruce Wayne]; Robin [Dick Grayson]; Commissioner Gordon; Vicki Vale; The Shah of Nairomi; Eloise Leach
Synopsis
To deflect unwanted romantic attention from the Shah of Nairomi, Vicki Vale announces to the world that she is engaged to Batman. To avoid an awkward international incident, The Caped Crusader plays along with the scheme.
Reprints

The City of Ancient Heroes (Table of Contents: 16)

Genre
superhero
Characters
Batman [Bruce Wayne]; Robin [Dick Grayson]; The Gimmick Gang
Synopsis
Once a year, the residents of Legend City dress as mythological characters. When the Gimmick Gang hit the city to steal "King Midas's" gold, Batman and Robin must follow them and crack their disguises.
Reprints

The Man Who Shadowed Batman! (Table of Contents: 19)

Genre
superhero
Characters
Batman [Bruce Wayne]; Robin [Dick Grayson]; Commissioner Gordon; Alfred; The Inventor
Synopsis
Batman places a strangely shaped key in his utility belt for analysis. It is, however, a tracking device with which The Inventor can follow every move that he makes.
Reprints

14 panel excerpt depicting the final 4 strips of an ongoing adventure.