The Mystery Villain! (Table of Contents) 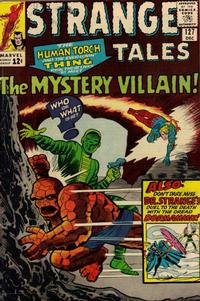 The Mystery Villain! (Table of Contents: 1)

Job Number
X-809
Genre
superhero
Characters
Mr. Fantastic [Reed Richards]; Human Torch [Johnny Storm]; Thing [Ben Grimm]; Wizard (flashback); Paste-Pot Pete (flashback); Sub-Mariner (flashback); Willie Lumpkin (mailman, cameo)
Synopsis
Following a race, Ben and Johnny complain to Reed that they've done pretty good and don't need a leader. Reed tells them they're free to work on their own. Ben and Johnny take part in a high-speed race, but discover on arrival that they're the only two contestants. On the salt flats they suddenly realize their cars are running out of control and it looks like they have been set up for a trap. They find themselves in an underground cavern facing an unknown villain with a question mark on his mask. Before it's over, they're ready to admit they're happy Reed is on their side.
Reprints

The "Mystery Villain" (or someone wearing the same costume) turns up in FANTASTIC FOUR #154 (January 1975).

Duel with the Dread Dormammu! (Table of Contents: 3)

Job Number
X-813
Genre
superhero; fantasy-supernatural
Characters
Dr. Strange; Dormammu; Clea (unnamed); The Mindless Ones; The Ancient One
Synopsis
The mysterious girl appears and takes Strange to The Mindless Ones, destructive creatures who are held back from killing by Dormammu's willpower. Dormammu imprisons the girl for betraying him and the battle begins. With Dormammu concentrating on defeating his foe the barrier holding The Mindless Ones collapses; he is forced to join forces with Strange to stop them. Now indebted to Strange Dormammu accepts his terms: no harm shall come to the girl and he must never set foot on Earth. Upon Dr. Strange's return to earth The Ancient One rewards him with a new cloak of levitation and amulet.
Reprints

Between pages 5 and 6 of Doctor Strange story.