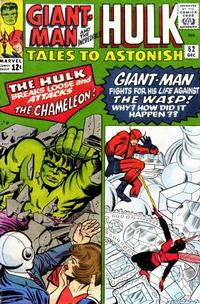 Giant-Man Versus the Wonderful Wasp! (Table of Contents: 1)

Job Number
X-807
First Line of Dialogue or Text
I've done it!
Genre
superhero
Characters
Giant-Man [Henry Pym]; Wasp [Janet van Dyne]; Second-Story Sammy
Synopsis
When Hank accidentally knocks himself out after a failed lab experiment, a petty thief makes off with his costume and begins to use the Giant-Man powers to commit crimes.
Reprints

Roussos inks per Nick Caputo, April 2014. Nick notes that Ayers was incorrectly credited in the splash page credits. Since the story was lettered before it was inked sometimes the credited inker was unavailable and the correction was not made before the comic went to print.

First Line of Dialogue or Text
Dear Stan, In the July issue of Tales to Astonish you had Spider-Man fighting Giant-Man.
Characters
Hulk [Bruce Banner]
Reprints

Job Number
X-820
First Line of Dialogue or Text
I'll break free sooner or later!!
Genre
superhero
Characters
Hulk [Bruce Banner]; Thunderbolt Ross; Rick Jones; Betty Ross; Glenn Talbot; Chameleon [Dmitri Smerdyakov]; Captain America [Steve Rogers] (cameo); Leader (first appearance; face not revealed) (cameo); Humanoid (first appearance) (cameo)
Synopsis
The Hulk is captured in unbreakable restraints but slips through them when he turns back into Banner. Hearing that his buddy has been captured, Rick leaves Cap's side to go help his original super pal. The mysterious Leader sends the Chameleon to Gamma Base to find out what happened to an agent who didn't report back in (probably because he ended up falling down a hole in a robot suit last ish). Talbot and Banner begin their less than friendly rivalry. The Chameleon impersonates Banner and tries to steal a gamma grenade using Betty as a hostage but the Hulk thwarts his plans.
Reprints

Both Rick Jones and Glenn Talbot call Betty "Miss Brant" in this story.

The Incredible Hulk (Table of Contents: 5)

This pin-up shows Hulk breaking through a wall while someone with a gun is seen through the gap.