On-sale date from 1965 Books and Pamphlets, Copyright Office, Library of Congress.
This issue has variants:

Clash of Titans! (Table of Contents) 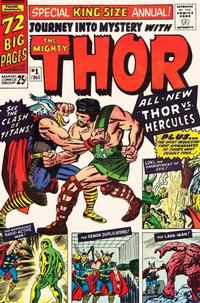 He's Looking for People Who Like to Draw (Table of Contents: 1) (Expand) /

When Titans Clash! (Table of Contents: 2)

Genre
fantasy-supernatural; superhero
Characters
Thor [Donald Blake]; Hercules [Alcaeus of Thebes] (introduction); Loki; Zeus (introduction); VILLAINS: Storm Giants
Synopsis
Thor and Loki come across a pair of storm giants attacking the gateway from Asgard to Olympus. During the ensuing battle, Thor is accidentally transported to the fabled land and finds himself in combat with the mighty Hercules with neither party willing to back down. After a titanic battle, Zeus stops the conflict and proclaims them both worthy allies and friends. Thor is sent back to Asgard and Zeus closes the passage forever.
Reprints

This story introduced the Marvel Universe version of Olympus and the Greek gods.

A Thor Bonus Feature [Map of Asgard] (Table of Contents: 3)

A pin-up of a "typical Asgard street scene", majestic with monuments, temples and the like.

Trapped by Loki, the God of Mischief! (Table of Contents: 4)

This story is divided into two parts: an unmarked first part (5 pp) and part two—"The Vengeance of Loki!" (8 pp). This is the first appearance of Asgard. Balder, Tyr and Odin only appear from behind, and Heimdall looks nothing like his later appearances.

The Demon Duplicators! (Table of Contents: 8)

Dr. Andrews is first called Basil by Jane Foster on page 6 but then is called Bruce by Dr. Blake on the last page.