The Three Super-Enemies! (Table of Contents) 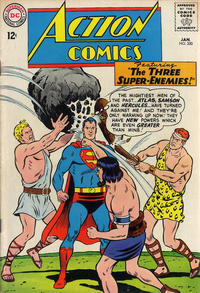 Salute to Courage (Table of Contents: 1)

inside front cover; published in cooperation with the National Social Welfare Assembly

The Three Super-Enemies! (Table of Contents: 2)

Genre
superhero
Characters
Superman [also appears as Clark Kent; also appears as Omni-Menace]; Atlas; Samson; Hercules; Lois Lane; Jimmy Olsen
Synopsis
To protect his secret identity, Superman is forced to call three heroes from the past to stop a gang of criminals menacing Metropolis, but he accidentally draws them from a parallel world where the heroes are really villains.
Reprints
Keywords
Fortress of Solitude; Kandor

Per Bob Bailey, all the artwork for the story except the splash page was by Al Plastino.

The Man Who Broke Supergirl's Heart (Table of Contents: 5)

Genre
superhero
Characters
Supergirl [also appears as Linda Danvers]; Randor (death); Lord Bronar (villain); Skoll (villain); Zor-El (cameo); Allura (cameo)
Synopsis
Interplanetary criminals Bronar and Skoll create an android whose mission is to make Supergirl fall in love with him so that he can lure her into a trap where her super-powers will be stolen.
Reprints
Keywords
Green Kryptonite; Kandor