The Man of My Dreams (Table of Contents) 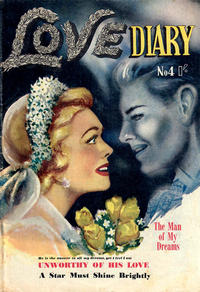 Unworthy of His Love (Table of Contents: 1)

In the splash panel, Lila's suitor is referred to as "Howard" by his parents, but in the story his name is George.

The Man of My Dreams (Table of Contents: 2)

Genre
romance
Synopsis
High school student Phyllis meets actor Fredric Parker and decides he is her model for the perfect man. Even when she goes to college, she turns down dates, preferring to dream about finding her perfect mate. After Fredric Parker is involved in a scandal, Phyllis realises there is no perfect man. She reluctantly dates football player Jimmy. Jimmy’s behaviour during an emergency makes her realise that he’s brave and sweet and she discovers he is the man of her dreams.
Reprints

A Star Must Shine Bright (Table of Contents: 3)

Genre
romance
Characters
Karen Fallon; Philip Hall; Bruce Treadwell; Martha Hines; Dave Baxter
Synopsis
Rising-star Karen loses two lovers and nearly her career by being herself. Martha, Karen’s housekeeper and confidant, advises her to hide her sincerity and just show glamour. It works in the studio, but is a turnoff for Karen’s new lover, Dave. But Martha orchestrates a chance for Dave to see the real Karen, as an apology for her poor advice. Karen concludes, “True love cannot come to any girl who is not first true to herself…”
Reprints

The world premier of Captain Horatio Hornblower was on 12 April 1951. It premiered in Australia 6 March 1952.